November 11, 2019–Before and After Pictures from Avalon Hydraulic Beach Fill 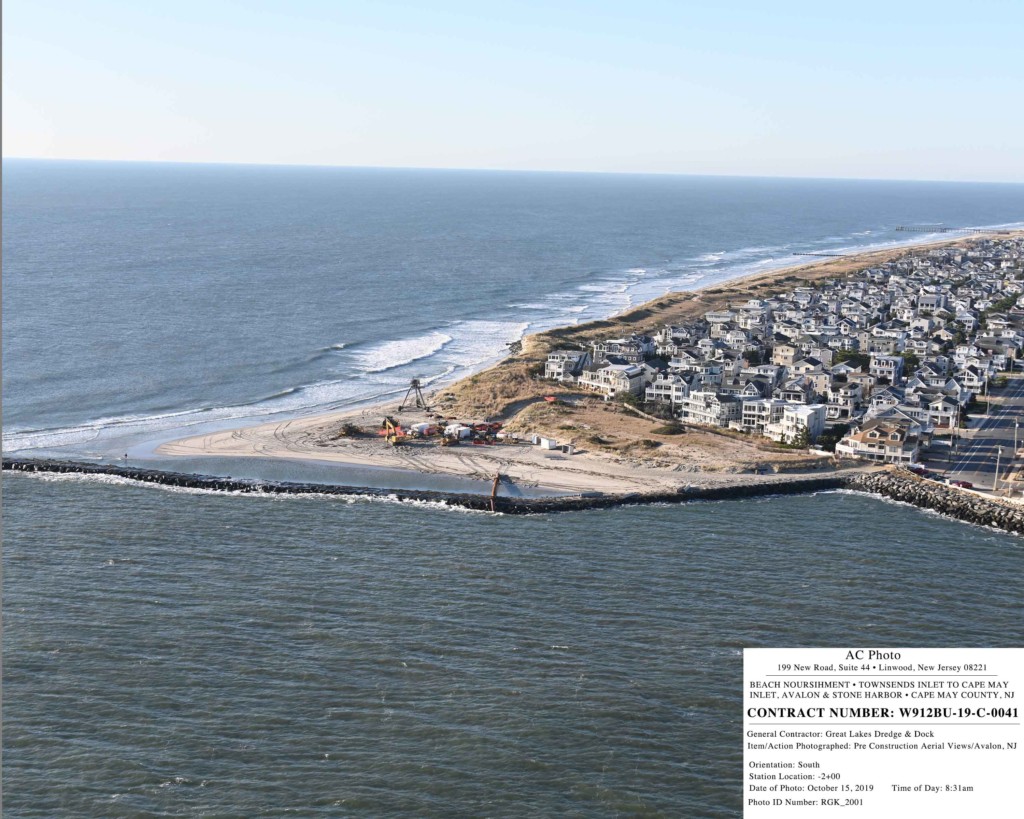 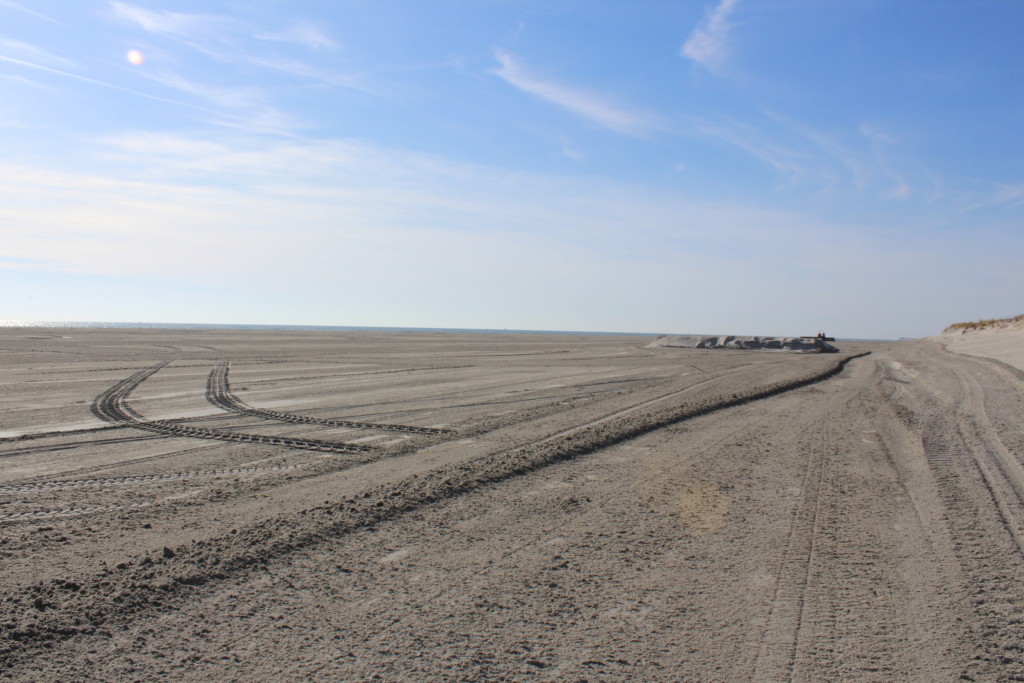 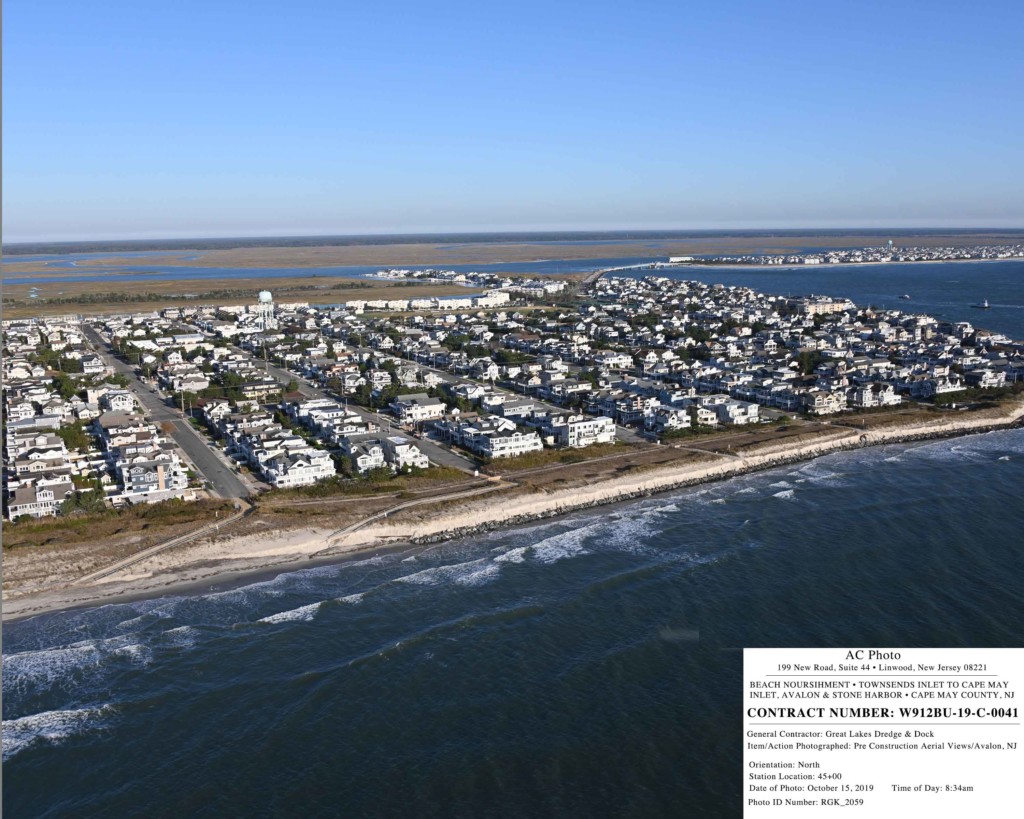 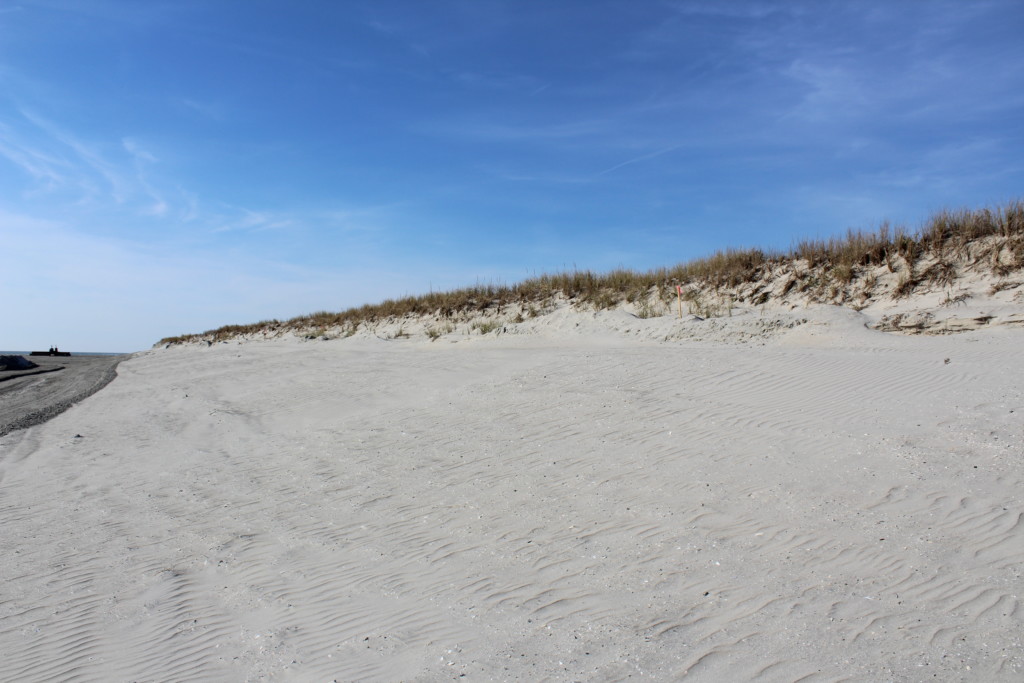 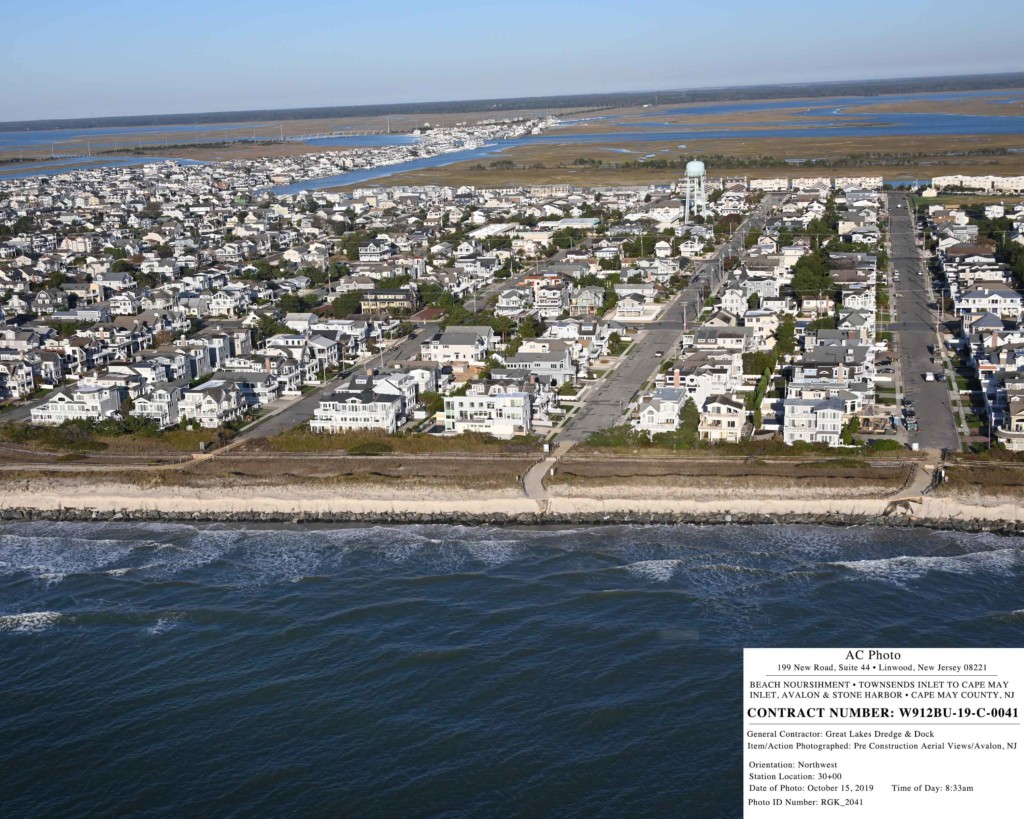 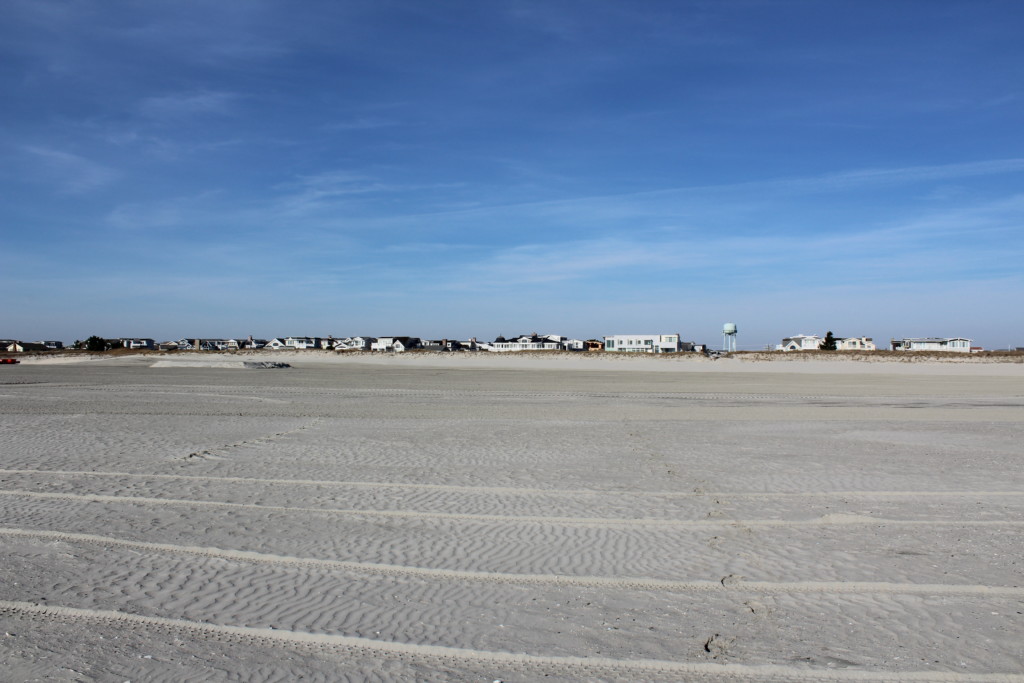 The hydraulic beach fill project for Avalon concluded on Sunday, November 10th, at 4:27pm.  The dredge “Illinois” put the final volume of sand onto the Avalon beaches, with the project resulting in approximately 675,000 cubic yards of sand being placed on the beaches between 9th Street and 20th Street.  Now that the hydraulic pumping of the sand is completed, crews will spend about one week demobilizing from the site of the beach fill with heavy equipment removing pipe and other materials from the beaches.  Please keep in mind this is still an active construction zone for about another week.

Great Lakes Dredge and Dock Company reports that the actual pumping of sand onto Avalon’s north end beaches could conclude as early at Tuesday, November 12th.  Great Lakes has taken advantage of calm seas and weather to have production days that have topped 50,000 cubic yards of sand per day with no major mechanical or weather interruptions over the past week.  As of November 7th, 520,046 cubic yards of sand have been placed on the beaches in the fill area, which is 9th Street south to 20th Street.  155,217 cubic yards of sand remain to be placed on the beach.  Once the actual hydraulic pumping of the sand is completed, Great Lakes will take about one week to demobilize the dredge and the pipe on the beach.  The Avalon Department of Public Works will be responsible for the construction of the access paths on to the beach.  There is a stockpile of sand placed on the beach that will be used to finish the beach paths to the new beach.  Once Avalon’s project is completed, the dredge “Illinois” and the crew will mobilize to Strathmere/Sea Isle City for another beach nourishment project.

The Borough of Avalon attended the regular weekly meeting involving updates to the hydraulic beach fill project.  The dredge “Illinois” has been taken to Cape May, NJ to safe harbor to ride out a storm front that will push through our region Thursday night/Friday morning.  Once the front passes, the “Illinois” will be brought back to Townsend’s Inlet to resume the beach fill project, likely during the daytime hours on Saturday, November 2nd.

To date, 291,432 cubic yards of sand have been placed on the beach with 383,568 cubic yards of sand remaining.  The sand is being placed between 9th and 20th streets to restore beaches and dunes to a template designed by the United States Army Corps of Engineers.  All equipment for the project has arrived except one piece that will be delivered via truck sometime next week.

There have been no safety incidents associated with this beach fill project.  Avalon will continue to provide updates on this web page as needed. 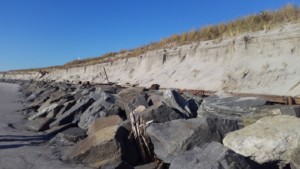 The Avalon Beach Fill Project is still working in the north end of the community with select beach paths closed in the north end due to construction, and erosion, from the recent Tropical Storm Melissa.  Great Lakes Dredge and Dock Company met with USACOE and NJDEP officials, along with municipal officials, to discuss the project and the reparations of the dunes needed in the north end.  All equipment is currently on site, except for two loads of pipe that will be delivered to Avalon next week.  It is the current intent to perform the base bid of the project (425,000 cubic yards of sand) along with Option One (250,000 cubic yards of sand) in the north end between 9th Street and 20th Street.  The dredge “Illinois” went down on Wednesday, October 23rd at 11:16am due to a mechanical issue; hydraulic dredging is expected to resume during the evening of Thursday, October 24th.

Avalon’s hydraulic beach fill project began Friday, October 18th, at approximately 5:30pm.  Sand is being pumped on to north end beaches in our community.  As of Sunday, October 20th, beach paths at 9th-11th streets are closed for safety reasons as the beach is under construction.  There have been no delays, as of this morning, on the progress of the beach fill. 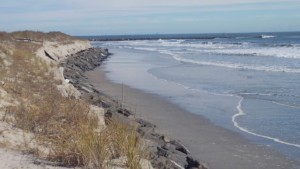 Avalon’s hydraulic beach fill could begin during the afternoon hours of Friday, October 18th.  Great Lakes Dredge and Dock Company informed the Borough that the dredge “Illinois” is currently in Cape May and is expected to leave Cape May early Friday morning.  Sand may be pumped on the 9th Street beach as early as Friday afternoon.  All of the equipment has arrived for the beach fill project, except for an additional 1,000 feet of pipe which will arrive soon and access the beach at the 32nd Street beach path.

The Avalon Borough Council approved, on a 4-0 vote, an emergency appropriation for the Borough’s contribution to this beach fill project.  Partners at the United States Army Corps of Engineers and the New Jersey Department of Environmental Protection are planning to add more sand to the project.  The base bid is 425,000 cubic yards of sand to be placed between 9th-20th streets.  It is anticipated that either Option 1 (250,000 cubic yards) or Options 2 and 3 (combined 175,000 cubic yards of sand) will be added to the project.  It is also possible that the project may extend slightly beyond 20th Street.  The Borough lost an additional 100 feet of beachfront during the Columbus Day nor’easter identified as Melissa.

Individuals with beach vehicle permits will be directed to avoid the project area as the north end beach will be under construction for several weeks.  Also, some beach access points in the north end of Avalon are closed to pedestrian access as they are both unsafe, and in the middle of the project area.

October 10, 2019–Equipment Arriving for Beach Fill; Project to Begin on or About October 20th

Avalon attended a progress meeting on the 2019 beach fill project on October 10, 2019.  During the meeting, Great Lakes Dredge and Dock Company announced an anticipated start date of October 20th for the actual hydraulic work to begin.  Once the work begins, it will continue 24 hours a day, seven days a week until the project is concluded, absent rough seas or mechanical issues.  The dredge “Illinois” is still docked in Norfolk, VA as it awaits calmer seas to begin its voyage to Cape May County, NJ.  Survey work will be conducted by the contractor on October 13-14th, and there is anticipation that the subline that will run from the dredge to the onshore pipe will be installed on October 14th.  Additional updates will be provided when warranted.

October 3, 2019–Equipment for Hydraulic Beach Fill to Arrive Over the Next Several Days

The dredge “Illinois” is currently in Norfolk, VA and will be brought to Townsend’s Inlet to conduct the project.  The “Illinois” will be brought to Cape May where it will stay until mobilization is ready.  The dredge will be prepped for two days in Cape May, and then begin a six-hour journey to Townsend’s Inlet.  Dredging is anticipated to begin in a time frame between October 15-19th, 2019.  The dredge may pump 20,000 cubic yards of sand a day onto the beaches in northern Avalon.  The dredge will leave Cape May when it’s ready to do so, and only in calm ocean and inlet conditions.

Please be aware of traffic control flaggers that may be in place on our roadways as the equipment is brought in to the Borough.  Also, anyone possessing a beach vehicle permit shall recognize that a portion of the north end beaches will be blocked for access by vehicles and pedestrians as this work progresses.

The Borough of Avalon has entered into a partnership with the United States Army Corps of Engineers and the New Jersey Department of Environmental Protection for a hydraulic beach fill to restore north end beaches.  The project is anticipated to place at least 475,000 cubic yards of sand on Avalon’s beachfront from 9th Street to 20th Street to restore beaches to a federal template that existed prior storm events over the past two years.

“By participating in these partnerships, Avalon will receive a beach fill worth several million dollars for a fraction of the cost”, said Avalon Mayor Martin Pagliughi.  “Most importantly, this fill will provide valuable protection to the north end beaches that are eroded by Atlantic storm events that impact our coastline, and a recreation beach for 2020 and beyond”.

Great Lakes Dredge & Dock Company, LLC of Oak Brook, Illinois was awarded a $7.56 million contract to conduct the beach fill.  This amount covers the mobilization of the dredge “Illinois” and related equipment to the project which calls for 425,000 cubic yards of sand in the base bid.  It is intended that an option to place an additional 50,000 cubic yards of sand in the fill area will be added to the base bid.  Avalon’s anticipated financial participation in the project is less than ten percent of the total overall cost.

Mobilization for the project will occur over the next few weeks with a dredge subline to be placed across Avalon’s 8th Street Jetty.  It is possible the mobilization will be completed before Columbus Day Weekend, October 12-14th.  Dredging is expected to begin before the end of October and take several weeks to complete.  The project will be performed 24 hours a day, seven days a week and will only pause for extremely bad weather/rough seas or mechanical issues.  The project also includes dune and berm restoration and the re-grading of scarps that were caused on the beach by storm events.

“This beach fill is important for the public safety and recreational interests of the Borough and represents a tremendous value thanks to our longstanding partnerships with the Corps and the NJDEP”, said Council President Dr. Nancy Hudanich.  “This projects also results in the Borough not having to conduct a sand back passing project in the spring of 2020, which frees up Public Works personnel for other essential projects in the Borough”.

The beach fill will work in a north to south operation, beginning on 9th Street.  Beach access points will be closed to the public within 1,000 feet of the immediate fill area.  As the project continues to move south, newly restored beaches will be open to the public.