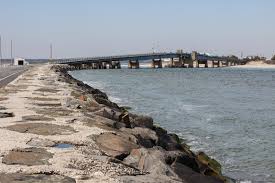 The Townsend’s Inlet Bridge is owned and maintained by the County of Cape May.  It connects the north end of Avalon to the south end of Sea Isle City.  For additional information, contact the office of the Cape May County engineer at (609) 465-1035.

The County of Cape May has announced that the Townsend’s Inlet Bridge will be closed to the public starting Monday, September 17th, 2018 and will likely remain closed through May 22nd, 2019.  The purpose of the closure is to conduct four separate rehabilitation projects on the bridge, including major work on the Avalon side of the span.  Avalon Business Administrator Scott Wahl attended the pre-construction meeting for the project held on August 15, 2018.

This construction contract is the result of conditions encountered in 2017 when the bridge was closed for three months for emergency repairs on one of the piers on the Avalon side of the bridge.  Divers who inspected the bridge discovered a steel H-pile that was broken.  It has been determined that it is more effective to replace the seven spans due to the deteriorated condition of the piling and superstructure in these spans.

The demolition of these structures on the Avalon side of the bridge are expected to begin on or about September 24th, 2018.  Crews will be working double shifts initially to take advantage of mild fall weather, between the hours of 6:00am-10:00pm.  Some work will be conducted on Saturdays, no work is likely to be conducted on Sundays.  All demolition work is expected to be completed during 2018; all work in the water must be completed on or before February 28, 2019.  Girders are expected to be set after January 1, 2019.  All State and Federal permits for this work have been secured.

There will be no pedestrian or motor vehicle traffic on the bridge during this construction project; no single-lane operation of the bridge is possible as the spans and piers will both be replaced.