Notice of Construction on Ingrams Thorofare Bridge on Avalon Boulevard 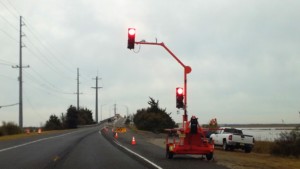 The following information was provided to Avalon by the Office of the Cape May County Engineer regarding construction work coming to Ingrams Thorofare Bridge, the “high span” bridge on Avalon Boulevard in Middle Township, just west of Avalon:

It is contemplated that the hydro demolition of the existing concrete deck on the bridge will begin just before, or just after, Thanksgiving.  Concrete pouring on the deck will begin around the Christmas holiday.  There will be some winter shutdown on the bridge as concrete will not be poured in extremely cold weather.  However, the single lane with the traffic control device will remain in place.  The first year phase of the project will end on or about May 7, 2020.  Work commences again in September, 2020.  No work will be done on the Thanksgiving or Christmas holidays.

The County of Cape May has entered into a contract with South State Construction for the reconstruction of the existing bridge deck and miscellaneous structural repairs to the Ingram’s Thorofare Bridge located along Avalon Boulevard. The proposed work will include the rehabilitation of the existing deteriorated concrete deck, structural steel and prestressed concrete beam repairs, beam jacking and bearing replacement at piers 9 and 13, and replacement of the existing beam guide rail approaches with new guiderail. The existing concrete deck will be removed either full depth or partial depth by the hydro-demolition process. The deck along six of the spans will be replaced entirely, and the remaining 17 spans will consist of a partial depth replacement. The concrete bridge deck will then be overlaid using High Performance Concrete. Upon completion, the new concrete surface will be diamond ground to provide for a smooth riding surface and have groves saw cut into the surface for improved drainage and skid resistance.

Work on the project will begin by the middle of November 2019 and will proceed in two stages due to the magnitude of the work. Stage one will involve the replacement of the concrete deck of the east bound lane and shoulder. Work will proceed as Stage 1 thru the winter and into the spring of 2020. The work on Stage 1 is expected to terminate by May 7 2020 and the project will undergo a seasonal shutdown thru the summer months. Work will resume as Stage 2 on the second Monday in September 2020. The project has an overall final completion date of June 18, 2021.

Since one side of the bridge deck will be rehabilitated during each stage of construction, vehicle access will be restricted to one lane of passage. During Stage 1, work will occur south of the bridge centerline, so the existing west bound travel lane will provide access for alternating traffic. Traffic will be maintained north of the centerline during this Stage. The traffic lane will be separated from the construction area by means of a concrete barrier installed across the bridge length. One 11’ wide travel lane will be maintained for vehicles. A temporary traffic signal will be installed at each approach to the bridge in order to alternate traffic across the bridge within the west bound lane. The traffic signal will be equipped with a digital display panel showing the time remaining until the signal changes to green for waiting traffic. The temporary signal operation and one lane of travel access will begin in the middle of November and continue until May 7 2020. After May 7, 2020, traffic will be returned to one lane in each direction across the bridge.

Stage 2 is scheduled to begin on the second Monday of September 2020. Stage 2 will consist of the rehabilitation of the bridge deck situated north of the centerline. Traffic will be limited to one travel lane south of the centerline. As in stage 1, traffic will be separated from the work zone by a temporary concrete barrier curb. Traffic during stage 2 will alternate using temporary traffic signals at each approach to the bridge. It is anticipated that the work requiring the temporary traffic signal will be completed by April 30, 2021 at which time the bridge will be opened to two way traffic permanently.

Motorists are advised to use care while driving thru the construction zone. Motorists should also expect delays due to the lane restriction and use of a temporary traffic signal. Motorist should proceed

slowly across the bridge to ensure their safety and the safety of the workers. Due to weather uncertainties, the contractor may opt to work long days, nights and on weekends.