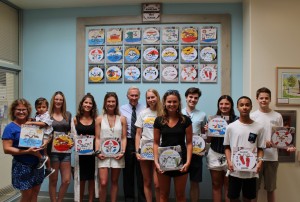 Past winners with Mayor Pagliughi 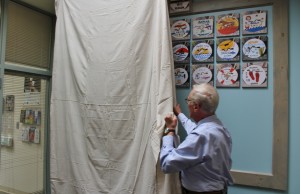 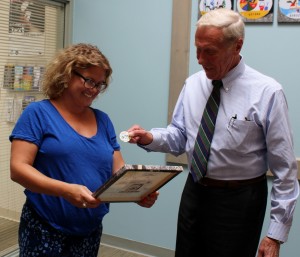 Avalon Mayor Martin Pagliughi unveiled a brand new wall inside Borough Hall that honors students who have created art work for annual beach tags in the community.  The tags have been photographed and enlarged, showing all of the art work of the students who have created art for beach tags dating back to 1999.  The wall also includes space for artwork by future honorees.

“This beach tag art program conducted by the Avalon Elementary School is a legacy project in the Borough”, said Avalon Mayor Martin Pagliughi.  “We are very proud of the students whose artwork was chosen for the beach tags and this wall will honor past, and future winners, of the beach tag art contest”.

The concept for the wall was developed by longtime Borough employee Kimberly Mastriana.  Photos of the past beach tags were taken on the beach this spring by Avalon Business Administrator Scott Wahl.  The wall was painted and framed by Dave Garafolo of the Avalon Department of Public Works.

All of the photos were converted to a small canvas picture and adorn the wall inside the foyer of Avalon Borough Hall.  Mayor Pagliughi welcomed all of the honorees before the June 26th, 2019 Council meeting and unveiled the wall officially to the public.  The wall also includes a plaque that recognizes all of the winners of the annual beach tag art contest at the Avalon Elementary School.  The very first beach tag art contest winner, Holly Stone, was recognized by Mayor Pagliughi at the event.

Here are the past winners of the Avalon Beach Tag Art Contest: