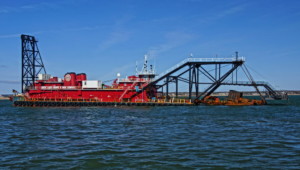 The Borough of Avalon has entered into a partnership with the United States Army Corps of Engineers and the New Jersey Department of Environmental Protection for a hydraulic beach fill to restore north end beaches.  The project is anticipated to place at least 475,000 cubic yards of sand on Avalon’s beachfront from 9th Street to 20th Street to restore beaches to a federal template that existed prior storm events over the past two years.

“By participating in these partnerships, Avalon will receive a beach fill worth several million dollars for a fraction of the cost”, said Avalon Mayor Martin Pagliughi.  “Most importantly, this fill will provide valuable protection to the north end beaches that are eroded by Atlantic storm events that impact our coastline, and a recreation beach for 2020 and beyond”.

Great Lakes Dredge & Dock Company, LLC of Oak Brook, Illinois was awarded a $7.56 million contract to conduct the beach fill.  This amount covers the mobilization of the dredge “Illinois” and related equipment to the project which calls for 425,000 cubic yards of sand in the base bid.  It is intended that an option to place an additional 50,000 cubic yards of sand in the fill area will be added to the base bid.  Avalon’s anticipated financial participation in the project is less than ten percent of the total overall cost.

Mobilization for the project will occur over the next few weeks with a dredge subline to be placed across Avalon’s 8th Street Jetty.  It is possible the mobilization will be completed before Columbus Day Weekend, October 12-14th.  Dredging is expected to begin before the end of October and take several weeks to complete.  The project will be performed 24 hours a day, seven days a week and will only pause for extremely bad weather/rough seas or mechanical issues.  The project also includes dune and berm restoration and the re-grading of scarps that were caused on the beach by storm events.

“This beach fill is important for the public safety and recreational interests of the Borough and represents a tremendous value thanks to our longstanding partnerships with the Corps and the NJDEP”, said Council President Dr. Nancy Hudanich.  “This projects also results in the Borough not having to conduct a sand back passing project in the spring of 2020, which frees up Public Works personnel for other essential projects in the Borough”.

The beach fill will work in a north to south operation, beginning on 9th Street.  Beach access points will be closed to the public within 1,000 feet of the immediate fill area.  As the project continues to move south, newly restored beaches will be open to the public.