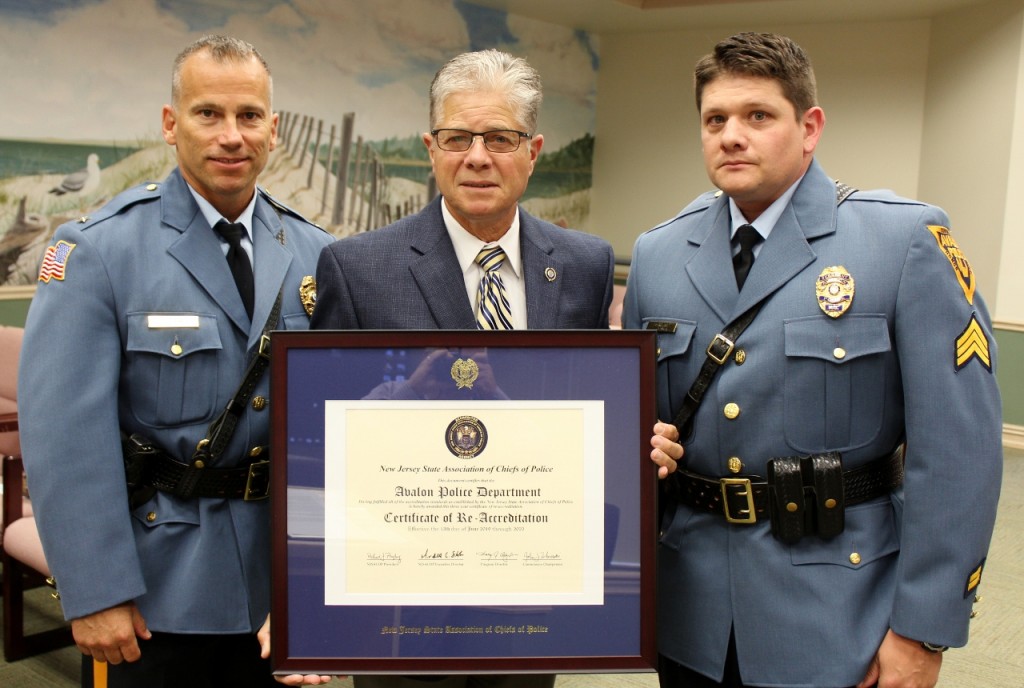 The Avalon Police Department has received its third, three-year accreditation from the New Jersey State Association of Chiefs of Police (NJSACOP).  During this process, the Avalon Police Department received a perfect 100% compliance, putting the department in the top one percent of departments statewide that have been re-accredited for a second time with a perfect compliance record.

“This is an outstanding achievement by the Avalon Police Department and represents that we have one of the finest, most well-trained departments in the State of New Jersey”, said Avalon Mayor Martin Pagliughi.  “Our community is very grateful for the professionalism of the Avalon Police Department and thankful for its third consecutive accreditation”.

Harry Delgado from the NJSACOP presented the reaccreditation certificate to Police Chief Jeffrey Christopher and Sergeant Eric Heisman during the August 14, 2019 meeting of the Avalon Borough Council.  During his remarks before Council, Delgado noted that approximately 43 percent of the police departments in New Jersey are accredited, and only 11percent of the departments have been reaccredited for the second time.  Only one percent of departments statewide that have been reaccredited twice did so with perfect compliance.

The accreditation process proves that the Avalon Police Department is compliant in all facets of operations.  Accreditation also saves the Borough on insurance premiums as accredited departments are less likely to be exposed to expensive lawsuits.

The process of becoming an accredited police department is a continuous process throughout the year.  The Avalon Police Department is obligated to provide specific proof and evidence that the Department is following the guidelines of the NJSACOP accreditation as well as following its own policies and procedures.

For more information about the Avalon Police Department, visit www.avalonpolice.org.