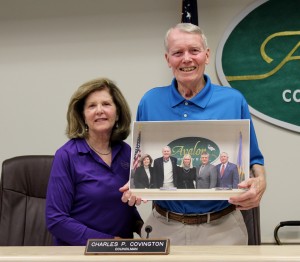 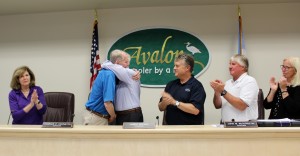 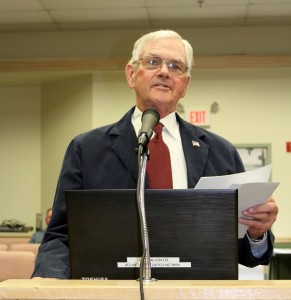 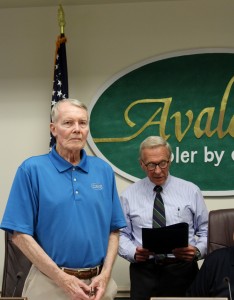 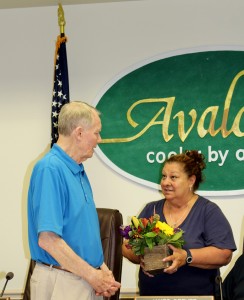 Mayor Martin Pagliughi read a proclamation from Mayor and Council that noted Covington’s legacy of public service in the Borough.  The proclamation noted that Covington served as Council president on five occasions and on various committees, including the Revenue and Finance Committee which has been directly responsible for the Borough’s AAA bond rating and consistently low municipal tax rate.

Covington was also recognized for his work with the perennial five-star Avalon Free Public Library where he served as a liaison.  He served on the Recreation, Insurance, and Technology committees for the Borough throughout his tenure.

Covington was very active in numerous organizations including the Avalon Lions Club, the Helen L. Diller Vacation Home for the Blind, and Avalon Senior Citizens Organization.  Jack Keenan, the President of the Avalon Home and Land Owners Association, presented a donation to the Diller Home from AHLOA to recognize Covington’s charitable efforts.  Lynda Pagliughi also presented a floral bouquet to Covington for his wife Lynn, who was also very active in many civic organizations in Avalon.

The Avalon Borough Council will officially reorganize on Monday, July 1st at 12 Noon.  Covington’s seat will be filled by newly elected Sam Wierman.  Wierman, Mayor Pagliughi, and Councilwoman Barbara Juzaitis will be sworn in to four-year terms.