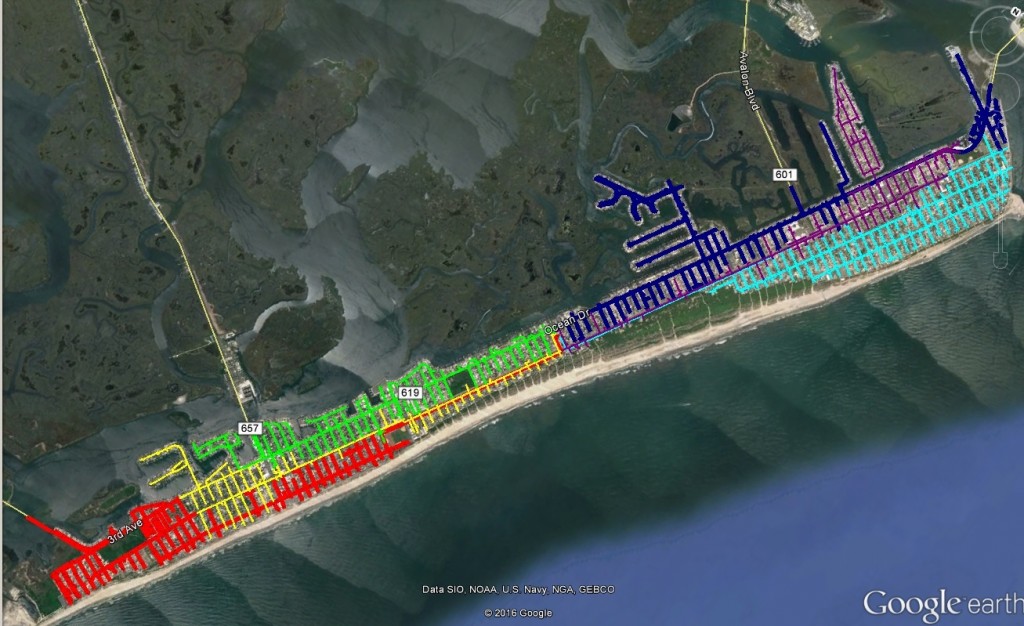 This color coded map shows the two new distribution feeders to be provided by Atlantic City Electric. The feeder in northern Avalon in light blue is “Ocean”; the feeder in red is “Hereford”

All poles and anchors for the project have been set along the eastern portion of Dune Drive.  The contractor will have two full framing crews and one bucket crew will begin pulling spider cables this week.

Atlantic City Electric may be able to have all poles set for this project by the end of the week, Friday February 9th (weather permitting).  Pole sets are taking place this week from 42nd Street north to 34th Street.  Framing crews will start on 58th Street moving north.  Once all of the poles are completing, two more framing crews will join in with transfer of facilities to the new poles.

For more on this project, please see the description below.

This week Mon -Wed (January 29th-31st) the crews will concentrate on 34 St. with pole set on Monday; then they will continue setting from 47th St. Bucket crews will frame & transfer the four poles on that intersection. Avalon Police will be assisting with traffic. The rest of week bucket crews will be spreading  and removing open wire and replace with triplex.

All of the new wooden poles that have been set on the eastern side of Dune Drive from 80th Street north to 60th Street will resume framing and pulling rope.  Meanwhile, the contractor working for Atlantic City Electric will be prepping for spot sets with Verizon from 60th Street north to 34th Street in the coming week.  Please see below for a complete project description.  The Borough of Avalon will also install LED street lights on the east side of Dune Drive in the same project area on existing wood distribution poles.

The new wooded utility poles are set up to 67th Street.  The crews are removing existing open wire (3 wires) and replacing the wire with triplex (single wire) from 80th Street to 63rd Street.  The crew did install two LED lights between 80th & 78th Street.  This week the crew will continue to set and frame the poles.  There will be some minor outages due to equipment or wire upgrades.  Customers will be notified in advance of the outages.  See below for the complete description of the project.

Atlantic City Electric’s contractor for this job, Valiant, has started work in preparation for the replacement of wood poles with wood poles along an eastern portion of Ocean Drive.  Valiant will be responsible for both the Hereford and Ocean legs of this project, described in detail below.  Letters have been sent as a courtesy to residents who have the poles adjacent to their properties.

During the week of December 11th, Valiant will start setting the new poles from 80th Street south to 60th Street.  Valiant worked last week on this project in order to get the new poles set this week.

For more details, see the project description below.  Valiant will not work on Christmas or New Year’s Day, and will finish this job in approximately 14 weeks.

On Tuesday, December 5th, 2017 Avalon Borough officials held a meeting with Atlantic City Electric and its contractor regarding the new feeder project as listed below.  This project involves improved electrical distribution along the eastern portion of Dune Drive, starting at 80th Street and running north to the mid block area of 34th/35th Street.  The construction on this project began on Wednesday, December 6th at 80th Street and will move in a northerly direction.

Both the “Hereford” and “Ocean” feeders will be completed in Avalon during this project.  Work will be done from 7:00am until approximately 5:30pm, Monday through Friday.  No work will be done on the Christmas or New Year’s Day holiday, but will resume on the day after the holiday.  No road closures are necessary during this project.  There will be very minor interruptions in electrical service (less than five minutes) to properties adjacent to this project.  This project will also include LED street lighting that will be more energy efficient, and provide more directional lighting.  This project will also result in the replacement of electrical lines and transformers, some of which are a quarter century old.

As explained below, this is a pole for pole replacement.  The new poles will be wooden, and slightly taller, than the existing wooden poles.  Wood poles are used for electrical distribution, while the taller, steel poles along Ocean Drive are used for electrical transmission.  This new upgrade and enhancement will provide more resiliency for the Borough as older equipment is replaced; it also provides resiliency by having new feeders where outages can be localized to a smaller area, and restored more quickly during an outage.

This project was supposed to begin in the Fall, 2016 but was delayed by the utility.  It begins the week of December 6, 2017 and is expected to last approximately 14 weeks.  It is completely funded by Atlantic City Electric.  The Borough also intends to replace the street lights on the west side of Dune Drive with LED lights to create a more uniform appearance and enhance public safety.

The notification letter that was sent to property owners adjacent to this project is here:  Atlantic City Electric Customer Notification Letter 2017

On Friday, September 30, 2016 Atlantic City Electric held a meeting with Avalon Borough officials to discuss the next phase of its energy improvement and resiliency project for the 7 Mile Beach.  Atlantic City Electric discussed a new project that will result in two additional distribution feeders in the Borough.  These additional feeders will lessen impacts shall power outages occur, shorten the feeder lengths, provide more switching options in our community, and eliminate the requirement of a feed coming from Middle Township.

Atlantic City Electric provided graphical depictions of the new feeders that will be provided to the Borough of Avalon.  They are identified in north end of Avalon in the color light blue and is referred to as the “Ocean Feeder”.  The second feeder appears in dark red at the southern portion of Avalon and is referred to as the “Hereford Feeder”.  The colored feeder areas show the extent to where the feeders will serve; construction work is only planned on the east side of Dune Drive in the feeder area.

These work zones currently have wooden energy distribution poles that distribute energy throughout the community.  The metal poles that were installed in 2016 along the east side of Ocean Drive are energy transmission poles that carry higher voltages.  The improvements being made include a pole for pole replacement of the 45 foot wooden distribution poles along the east side of Dune Drive in these two zones with 55 foot wood poles.  These poles will have two decks for cabling; the second deck is added to provide clearance between the cabling and to prevent the “galloping” of cables in strong gusty winds which can compromise energy reliability.  All street lights will be replaced during this project on the east side of Dune Drive.

In this photo from another community, the new two deck poles appear on the left side of the street while the older poles are on the right side. This is a depiction of the new distribution poles planned for the east side of Dune Drive in the project area.

This will be a much less intrusive project than the steel pole program along Ocean Drive.  The new poles will be located adjacent to the existing wood poles with impact to sidewalks or property that exists in the public right of way.  The old wood poles will be removed as part of this resiliency and reliability project.  The poles will be the same height and provide a uniform look.  The Borough of Avalon is in discussions with the New Jersey Board of Public Utilities over options that exist regarding the new lighting.  There will be very minor interruptions of power on a block where the new pole is being installed; no Borough-wide power outages are necessary for this project.

Additional information will be provided by the Borough and Atlantic City Electric as this project moves forward.  A public presentation on the project will occur before the Avalon Borough Council on Wednesday, October 26th, at 7:00pm at Avalon Borough Hall. 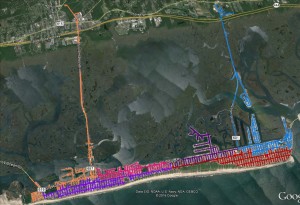 This graphic depicts the current distribution feeder system in Avalon before the two new feeders are added, depicted in the photo above in light blue and red